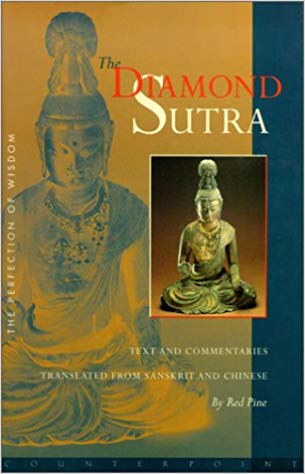 Red Pine’s The Diamond Sutra: Text and Commentaries Translated from Sanskrit and Chinese is a book that I recommend to readers who want  to explore the various Diamond Sutra translations and exegesis that remains untranslated today.

In this book, Red Pine presents a translation of the sutra based on his studies of the Sanskrit and Chinese editions and then treats the reader to a tour of the various commentaries as he explores the meaning of each passage.

For those of us who can read classical Chinese and/or Sanskrit, many Buddhist sutras appear more like kaleidoscopic visions than they do single, authoritative texts. Red Pine attempts to communicate that vision to English readers by noting the variations between at least seven different editions of the sutra preserved  in Chinese and Sanskrit.

The English-speaking world is most familiar with two editions of this sutra: Kumarajiva’s Chinese translation and the extant Sanskrit edition. These two versions have served as historical bookends: Kumarajiva’s version was translated in 403 CE, and the Sanskrit version represents a final form reached sometime around 700 CE.

In between those two points, however, are five Chinese translations by Bodhiruci (509 CE), Paramartha (562 CE), Dharmagupta (605 CE), Xuanzang (648 CE), and Yijing (703 CE). We’ve also discovered Sanskrit texts of the Diamond Sutra in recent years that are dated around the time of Dharmagupta’s translation. This is an academic topic because the differences are largely amplifications or minor edits of dialogue.

What’s more interesting in Red Pine’s book is his copious quotation of East Asian and Indian commentaries, giving the reader a sense of the conversation that took place in China about this text. Weaved in between these quotations, Red Pine documents his own journey as he reads and meditates on the sutra himself in modern America. The fact that he avoids the rabbit hole of academic analysis and debate is remarkable given the material that he works with.

Red Pine’s translations are free and meaningful, and the format he uses is reminiscent of exegetical texts in ancient China that collated the comments of various authors. If you’re looking for accessible books that explore the Diamond Sutra‘s place in classical China, this a good place to start.